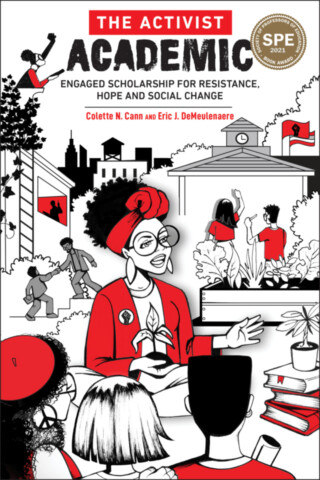 Donald Trump’s election forced academics to confront the inadequacy of promoting social change through the traditional academic work of research, writing, and teaching. Scholars joined crowds of people who flooded the streets to protest the event.

The present political moment recalls intellectual forbearers like Antonio Gramsci who, imprisoned during an earlier fascist era, demanded that intellectuals committed to justice “can no longer consist in eloquence ... but in active participation in practical life, as constructor, organizer, ‘permanent persuader’ and not just a simple orator" (Gramsci, 1971, p. 10). Indeed, in an era of corporate media and “alternative facts,” academics committed to justice cannot simply rely on disseminating new knowledge, but must step out of the ivory tower and enter the streets as activists.

The Activist Academic serves as a guide for merging activism into academia. Following the journey of two academics, the book offers stories, frameworks and methods for how scholars can marry their academic selves, involved in scholarship, teaching and service, with their activist commitments to justice, while navigating the lived realities of raising families and navigating office politics. This volume invites academics across disciplines to enter into a dialogue about how to take knowledge to the streets.

Click HERE to see a video of the book launch, moderated by Monisha Bajaj for Imagining America, with contributions from Margo Okazawa-Rey and John Saltmarsh.

Watch the #CompactNationPod interview, which runs between minutes 9:35 and 48:45. In this episode, Marisol Morales chats with Colette Cann and Eric DeMeulenaere, as they share the true stories of their lives as activists, scholars, and parents who are trying to push forward social change through academic work.
Compact Nation Podcast · The Activist Academic

What does it mean to be both an activist and an academic? Watch the FreshEd podcast Becoming an Activist Academic, which features authors Colette Cann & Eric DeMeulenaere discussing their own journeys as a guide for merging activism and academia.

Chapter 6
Year Six - Activist Service in Schools and the Community

"In The Activist Academic, Cann (Univ. of San Francisco) and DeMeulenaere (Clark Univ.) present a strong collaboration to chronicle their journey through academia from year one as newly hired academics to earning tenure in year seven. They seamlessly intertwine their stories and experiences as they offer readers an intimate glimpse into this seven-year progression, sharing their discussions of both theoretical and conceptual frameworks of their research as well as their understandings of best practices in teaching and learning. Through their candid narrative, the authors give readers an honest account of the highs and lows of pursuing an activist academic agenda, noting the questions and struggles that emerged through their research. They also share their vision of scholarship, teaching, and service as commitments to social justice while demonstrating for readers how they navigate some of the realities of managing life in academia. This book serves as a guide for other academics to engage in a dialogue about how they may transition from theory to practice in their own journeys as activists confronting racial and social injustices both within and outside academia."

"Cann and DeMeulenaere’s book is a crucial addition to the gradually amplifying conversation around doing critical work within an academic environment that has been successfully courted by neoliberal thought… they perform their loving, resistant, and emerging activist practice across every page." (Click HERE to read the full review.)

“The narrative style of the book is engaging and tends to soften the use of dry academic language that is intuitively opposed to the theories on which the book is based. It is well-positioned to speak to the emerging academic and may provide sustenance and clarity to the experience of doing activist work—in education or social work—that seem to be the stated goals of these professions. The Activist Academic contributes to a body of work that is practically applying theoretical concepts to a range of academic activities. I recommend the book for those activists who are struggling with the barriers to succeeding in a traditional academic trajectory when moved by passion and belief in social justice to continue activist work.” (Click HERE to read the full December 2020 review in Affilia: Journal of Women and Social Work.)

“In deeply revolting times, Colette Cann and Eric DeMeulenaere have gifted us a book that is part GPS for navigating the academy; part glass of wine for surviving difficult politics; and part eavesdropping, as we listen in on their conversations, reflections, relations and even campfires. In the main narrative, The Activist Academic offers us a textual pajama party of laughter, relationship, teaching nightmares and radical innovations, activist research praxis and dilemmas. We appreciate through the pages the joys, struggles and wild imagination that grows at the intersection of activism and the academy. From the volume, we learn what it means to survive in the academy, with full heart and soul; in the footnotes, we meet the elders, ancestors and those who have written and journeyed before. As a critical small-book companion, the volume is a refreshing, radically honest and comforting text to accompany us as we carve radical possibilities, in the undercommons, with colleagues, students, activists, community members and movements for justice. The Activist Academic is oxygen for the researcher/scholar/teacher who dares to imagine the university as a site of radical accountability to justice.”

"With all the humor, honesty, and humility that you'd expect in a conversation between friends, the dialogues between Cann and DeMeulenaere that span cover to cover animate the potential and the challenges of approaching research, teaching, and service as an Activist Academic. But be ready: drawing deeply on theory and experience, this book will pull readers into the conversations, the inquiry, and the unavoidable demand that we dive into the unresolvable contradictions at the heart of being a professor committed to justice."