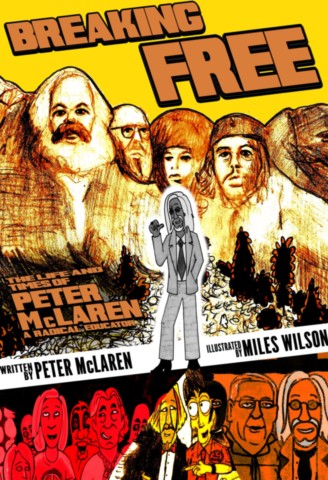 From Myers Education Press—the publisher who brought you such titles as A School with a View, Childhoods, and Student Activism in the Academy—comes a story or rather…a series of stories that are as out of this world as its protagonist. Long before he became a renowned Critical Studies professor at Chapman University, Peter McLaren was just another Toronto native trying to survive in a conservative working-class family. His father fought in WWII while his mother put food on the table, but—like his father—Peter was caught in his own battles dodging abusive teachers and navigating through an academic roller-coaster. Sure, his home life may be ripped from a '50s sitcom on the surface; but his background and the rest of his life from that point on was far from one…or maybe it was. This book chronicles Peter’s cross-country climb up the educational ladder as a teacher steeped in the school system, his encounters with various key players in history—from the Black Panthers to Timothy Leary, and everything else in between.

Perfect for courses such as: History of Education, Race and Ethnic Studies, Sociology of Education, Social Justice and Education, Democracy and Civics, Community Engagement, Policy Studies, and Critical Race Theory.

"Academic freedom of expression is an important ideal, and the author, this reviewer and readers may have to agree to disagree on some of McLaren’s political thoughts. All in all, Breaking Free: The Life and Times of Peter McLaren, Radical Educator offers an artistic retelling of the life and key works of McLaren and questions the reduction of education to mere classroom practices. Peter McLaren has certainly lived an interesting life, and in line with the ethos of critical pedagogy, his work deserves a critical reading that avoids automaton conformity. This comic book presents as good an introduction as any to McLaren’s massive oeuvre." (Click HERE for the full review in JALT, Vol. 4 Special Issue No. 1 [2021] )

"Breaking Free: The Life and Times of Peter McLaren, Radical Educator accomplishes both goals identified in the foreword: it offers an artistic telling of the life of radical educator Peter McLaren while provoking ‘readers to rethink education not as a set of classroom practices but rather come to see teaching as the journey of a lifetime, as a way of being and becoming, as a political project for building a socialist alternative for ourselves, our students, and our future.’ "(Read the full review HERE.)

“ZAP! POW! KABOOM! Here is a life story destined to be made into a comic book—the only medium wide and weird enough to capture the complex, dynamic, multidimensional, generative, shifting, and creative force that is Peter McLaren. Read this book and be inspired to dive into the contradictions, to launch your own voyage of discovery and surprise, to have your blooming in the noise and chaos of the whirlwind.”

Bill Ayers, author, To Teach: The Journey, in Comics

"The indomitable Peter McLaren is the living embodiment of critical pedagogy, a truly radical educator who has always been interested in stretching the limits of genre to explore, innovate and communicate. In the comic Breaking Free we see his ability to reinvent himself and communicate himself and his ideas afresh. That's why we all love him."

Michael A Peters, Distinguished Professor at Beijing Normal University, China Emeritus Professor in the Faculty of Education at the University of Illinois, Urbana-Champaign

“Albert Einstein once said that a life lived in the service of others is a life worth living. Now comes the story of Peter McLaren. The life and times of this renowned radical educator, as recounted in these engaging pages, holds up a mirror in whose reflection we see the great aspirations of our age. At once a piece of art, social criticism, and critical pedagogy, here is a portrait of the contemporary struggles of the oppressed, told to the backdrop of McLaren’s biography. Nothing less than a modern epic!”

William I. Robinson, Author of Into the Tempest: Essays on the New Global Capitalism

"McLaren's led a politically and intellectually rich— and entertaining — life, which is renewed through this compelling graphic novel. Each page is filled with important and relevant lessons we would do well to heed as we struggle for peace and justice."

"How was the radical educator educated? Find out here, as Peter McLaren leads us through the liberatory labyrinth of his life – from Toronto to San Francisco, Chiapas to Caracas, Azania to Anatolia, UCLA to the PRC. Meet his superhero comrades from Hugo Chavez to Che Guevara's daughter. Sail with him as he tacks between the turbulent tides of his allies Timothy Leary and Allen Ginsberg. Meet the teacher's teachers – Umberto Eco and Michel Foucault, Paolo Freire and Joel Kovel. The script is Professor Xavier meets The Invisibles. The illustrations are The Yellow Submarine meets Fantastic Planet, and/or Dragonball Z meets Transmetropolitan. Look out Avengers and Justice League! Breaking free of the artificial scarcity on superpowers, UCLA's most dangerous professor is here, armed with critical pedagogy and Marxist spirituality, to fight against bad schools and bad government, and to help us all join the revolution against the capitalist world-system and its national security states."

Quincy Saul, author/editor of Truth and Dare: A Comic Book Curriculum for the End and the Beginning of the World

“Peter McLaren is one of the leading architects of contemporary critical theory, a radical activist, a storyteller, a revolutionary Marxist humanist, a scholar of liberation theology, the poet laureate of the educational left, and much more. In the face of his tremendous achievements, Breaking Free: The Life and Times of Peter McLaren, Radical Educator avoids the trap of representing Peter as a classical comic hero. Instead, its authors weave a warm story about a working-class boy who has risen to become his own type of hero: an intellectual hero, a hero of humility and respect for everyone, who inspires and gently pushes people to do the best of their ability for the benefit of humankind. Breaking Free: The Life and Times of Peter McLaren, Radical Educator is a superb biographical sketch aimed at those who know little about Peter’s work, an eye opener for those who read Peter’s works but never met him in person, and an important contextualisation for those who seek deeper understanding of relationships between Peter’s works and the person behind them. With this extraordinarily important book, Peter McLaren once again crosses the well-entrenched border between ‘serious’ scholarship and popular culture and insists that the path to emancipation and freedom belongs to everyone.”

"A comic book! A comic book! But there’s nothing really comic about this graphic autobiography by one of our era’s most creative philosophers of education. After branching out from Paulo Freire to liberation theology, Peter McLaren’s poetic genius and astounding imagination have outdone themselves here with “Pow!”, “Crash!”, and “Bang!” that will leave readers inspired, breathless and smiling with delight."

“A valuable sort of "McLaren for Beginners" in which Peter offers his own Pedagogy of Hope in the stylistic tradition of Zap Comix! The resulting graphic memoir is a radically socialist and countercultural portrait of a life imaged both as and on behalf of the attempted humanization of the world. Critical pedagogy by any means necessary...”

“A wonderfully colorful, creative, radical, and lively way to bring together the lived history of an individual with the larger historical struggle for a more just world—indeed a revolutionary message for our times.”

“Breaking Free: The Life and Times of Peter McLaren, Radical Educator is a unique and important new publication. It is a beautiful compliment to his theoretical, philosophical, empirical and activist writing and engagement on the ground. It helps to fill in the story. It shows us how his life, thinking and work have been influenced, over the years, by other important colleagues, comrades and activists. In the spirit of Ruis' ABChé, this is a must-read for undergrads, graduate students, scholars and all who seek to make this world a better place.”

“Globally esteemed and erudite critical pedagogy icon McLaren, once again breaks new ground, collaborating with illustrator Miles Wilson, creating an autobiography that is one and the same time a Manifesto for a socialist alternative to capitalism. The images, darkly humorous, present a serious challenge for a new generation of youth.”