Shelley Burbank lives in San Diego, but her roots are sunk deep in the rocky soil of Maine. Her fiction has appeared in little and literary magazines, The Maine Review and The Katherine Press Review, and she was a features and news writer for The Waterboro Reporter weekly newspaper. Learn more at ShelleyBurbank.com. 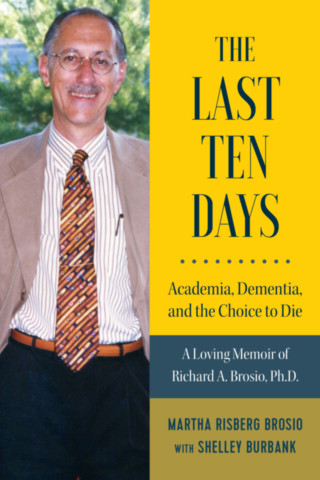 The Last Ten Days - Academia, Dementia, and the Choice to Die
A Loving Memoir of Richard A. Brosio, Ph.D.
Martha Risberg Brosio
With Shelley Burbank

The Last Ten Days addresses the concerns of loved ones and caregivers, providing them not only with information but also acknowledging the sadness and frustration, the heartache and bittersweet memories experienced during this painful time. To these readers, the book says, “You are not alone.”

The Last Ten Days: Academia, Dementia, and the Choice to Die is a heartrending memoir of love, scholarship, dignity, courage, and the choices one is forced to make when given the devastating diagnosis of a terminal illness.

Spanning sixty years, this extraordinary book recounts the love story of Martha Risberg Brosio and her husband, Richard Brosio, Ph.D., a brilliant scholar and college professor whose communication skills dazzled all with whom he came in contact. Teenage sweethearts who went their separate ways after high school, Martha and Richard reconnected twenty-six years later over a friendly dinner that sparked into passionate love. They married in 1983, enjoying a vibrant life.

Then tragedy struck. In late 2013, Richard was diagnosed with Primary Progressive Aphasia, a type of dementia similar to Alzheimer’s that affects the frontal and temporal lobes of the brain. The disease impacted Richard’s ability to communicate. Eventually, he would lose his verbal and processing skills. There was no cure. Determined to have a dignified death at the time and in the manner of his own choosing, Richard hastened his death two years after his diagnosis by voluntarily stopping eating and drinking, seeking only palliative and hospice care until the end.

Reminiscent of Still Alice, The Notebook, Tuesdays with Morrie, and When Breath Becomes Air, The Last Ten Days grabs the heartstrings and gives a mighty tug.